An Intro to Capacitors

In this post we’re going to give you a brief introduction to what a capacitor is as well as some examples of what it can be used for. This post will only scratch the capacitive surface, so you might want to read up on more comprehensive texts before starting designing and building electronic circuits with capacitors. They can blow up… 🙂

What Is a Capacitor? 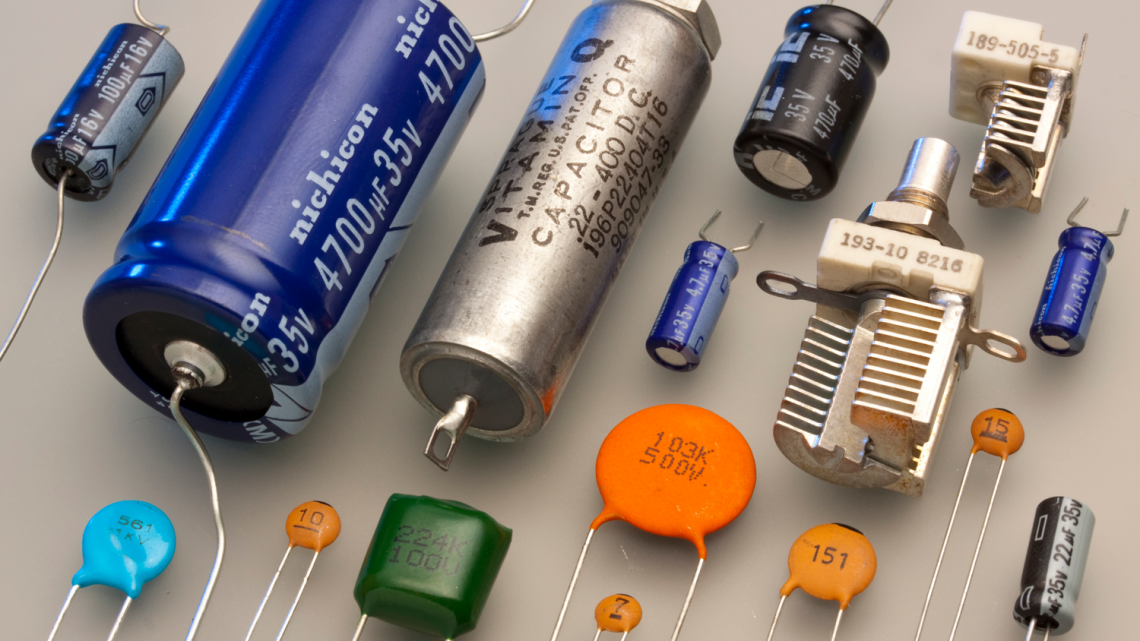 Capacitors are passive, two-terminal electrical components and perhaps the second most frequently used component after resistors. They are used to temporarily store and discharge energy in electronic circuits. One can almost look at capacitors as tiny (or sometimes not so tiny) rechargable batteries. The applications of capacitors are however usually quite different from how we tend to use batteries.

Some (but not all) capacitors are polarized, which means that they have a positive and a negtive terminal. The capacitance (size) of a capacitor is measured in farad (F), often in the area of pF to mF, and this amount tells you how much energy it can store. There are of course much larger capacitors out there as well. The capacitive size is not necessarily equal to the capacitor’s physical size.

How Do They Work?

We’re not going to go into detail about the physical principles around the construction of the capacitor in this post. The most important thing you need to know is how they work.

We’ll borrow this nice and descriptive gif from Sparkfun:

One important equation to keep in mind is this one:

In the gif above, switching the switch results in a quick change in voltage over the capacitor, resulting in current flow.

Connecting Capacitors in Series and Parallel

and when connecting them in parallel the resulting capacitance is

This is interestingly enough exactly the opposite of resistors.

These are just a fraction of areas where capacitors are used.

In power supplies to laptops and mobile phones there are often large capacitors. These are used to smooth out a rectified AC signal to a DC signal.

A diode circuit transforms the signal from the top graph to the middle graph. Notice how the capacitor smooths out the signal in the bottom graph by constantly charging and discharging. The capacitor is in this case connected in parallel to the load, which is whatever needs DC-voltage (laptop, mobile phone etc.). It compensates for the voltage drop by discharging itself. A capacitor alone is not enough to make the DC voltage completely constant, but you can use voltage regulators to “cut off” the excess voltage on top and get a nice constant voltage.

If you’re wondering why the LED on the adapter to your laptop is still on after you unplug it from the wall, it is because the capacitor is still discharging, giving power to the LED.

Small capacitors are often connected in parallel with the Vcc pin (the power supply pin) and GND on integrated circuits (ICs aka. chips). This is often required to supress voltage noise so that the IC works properly. They should be mounted as physically close as possible to the Vcc pin on the IC to avoid the inductance in the line from the power source or whatever. The bypass capacitors will compensate for sudden small drops in voltage on the Vcc pin. 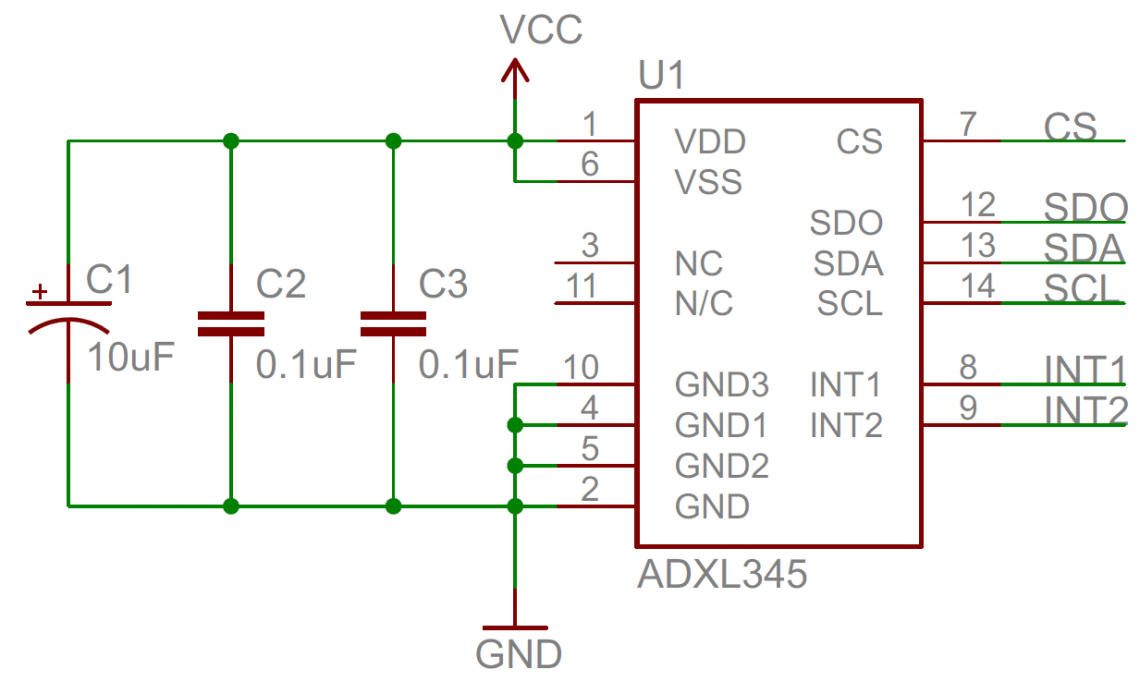 Bypass capacitors C1, C2 and C3 for an “ADXL345” IC. In this case the power supply pin is called VDD. Source: http://learn.sparkfun.com/tutorials/capacitors/application-examples

It’s sometimes wise to use several bypass capacitors with different values in parallel since differently sized (both in terms capacitance and physical package size) capacitors have different frequency characteristics. Thus they can smooth the signal out more efficiently (if you use proper value combinations). If you want to know more about this, here’s an excellent tutorial on multiple bypass capacitors: https://youtu.be/BcJ6UdDx1vg.

These examples are actually related in some way. They both smooth out signals and remove high frequency parts of a signal.

Also related to this is are analog filter circuits where capacitors are used to remove certain frequencies from a signal. They can smooth out a signal like in the other examples as a low-pass filter, or preserve the high frequencies instead as a high-pass filter. You also have band-pass and band-stop filters. Filters like these are for instance used in audio, radio and telephone systems.

To summarize: capacitors are super-important components and critical for making sure applications and other components work. A capacitor is often used to store and release energy to compensate for forseen or unforseen drops in voltage. In an ideal world the demand of capacitors wouldn’t be that high. Unfortunately, we don’t live in an ideal world, but the capacitors come to our rescue to make our lives a bit easier.

At a later date we might go into more detail around the different types of capacitors and when to use what in your own electrical design, so stay tuned! 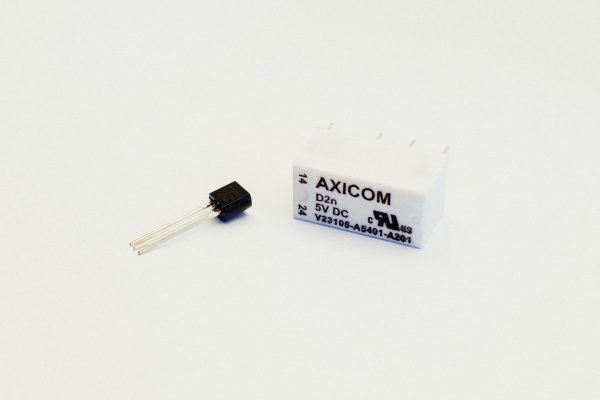 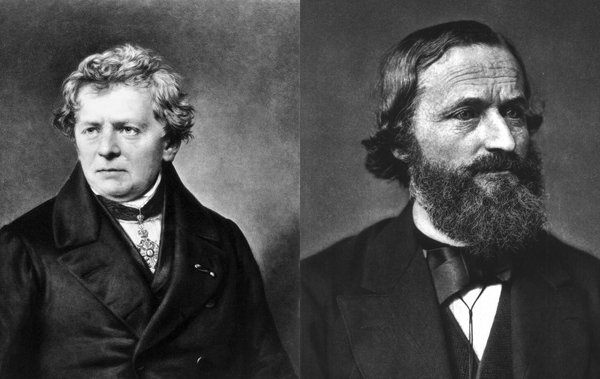 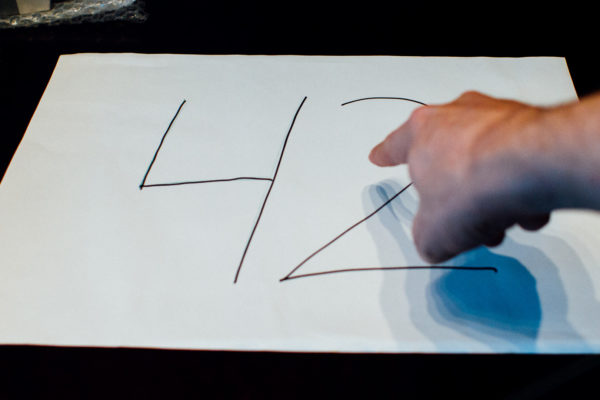 Getting Started with Programming – Part 7: Pointers in C